skip to main | skip to sidebar

Is there a direct relationship between the total number of people per representative and freedom? Consider the tale of two states: California and New Hampshire. As explained later in this article, various freedom rankings give California a very low score with respect to the freedoms enjoyed by its citizens; in contrast, “Live Free or Die” New Hampshire scores high in the freedom indices. As of the 2000 Census, California has a total population of approximately 34 million. And New Hampshire’s total population is approximately 1.2 million (about the same as the city of San Diego). Now we get to the interesting part. California’s huge population is represented by 80 legislators in the lower house of their state legislature. Given that fact, how many legislators would you expect to find in the lower house of tiny New Hampshire’s state legislature? 30? 60? 120?

New Hampshire’s 1.2 million citizens are represented by 400 legislators in the lower house of their state legislature! Compare that to the 435 representatives who, ostensibly, represent 300 million Americans in the federal House of Representatives.

Though the relationship between district population size and freedom may not seem obvious, it is easy to understand by considering this thought experiment: imagine a continuum between two extremes of representation. On one end there is a highly representative legislature comprised of relatively small electoral districts with one representative for every 1,000 citizens. At the other end of the spectrum, there is a government ruled only by a single elected official (i.e., a governor). It is easy to imagine that the highly democratic government would afford more liberties to the citizenry, whereas the oligarchic scenario is likely to be highly statist.

A new TTO report, “State Freedom Indices and Legislative District Population Sizes”, establishes that there is indeed a significant correlative relationship between smaller district sizes and increased freedom.1 This relationship can be shown using a simple analysis which relies upon a set of rankings known as “freedom indices”.

What is a “Freedom Index”?

A freedom index ranks all the states (which comprise the U.S.) according to the degree of freedom permitted by each of their respective governments. Identified in the TTO report are various freedom indices which focus on specific areas such as economic freedom, regulatory policy or personal freedom. For each category, the states are evaluated relative to a variety of pertinent criteria in order to determine their respective freedom scores. The evaluation criteria used to arrive at the freedom scores are fundamentally libertarian in nature; that is, greater personal and economic freedom is attributed to reduced governmental restrictions and taxation.

The average legislative district size for each of the fifty states is shown in the chart below. 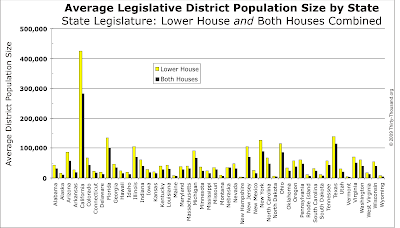 The TTO analysis examines each freedom index relative to the population size of the states’ legislative districts. Because the size of the legislative districts varies widely from state to state, the fifty states provide an ideal laboratory for evaluating the correlation between district population size and freedom. This simple analysis can be illustrated with the example already provided by California and New Hampshire.

The fact that high-freedom New Hampshire has very small electoral districts while low-freedom California has very large districts begs this question: is that a random occurrence or is it indicative of a broader underlying relationship?

Using the various freedom indices cited within the report, all fifty states are ranked from most free to least. That list is then divided into thirds: the most-free group, the middle group and the least-free group. For each of those groups, the average size of the state legislative districts is calculated.

One of the freedom indices evaluated was “Freedom in the 50 States: An Index of Personal and Economic Freedom” which was produced by the Mercatus Center at George Mason University.2 They report on five different indices as shown in the chart below. 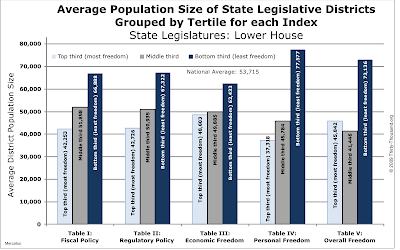 In order to explain this analysis, let’s take a look at the “Overall Freedom” index, the fifth index in the chart. Note that the average district size of the “least free” group, 73,136, is substantially larger than that of the most free group (45,842). In fact, it is 60% larger!

For all of the indices shown in the chart above, the average size of the least-free group of states is significantly larger than that of the most-free group of states. As shown in the TTO report, the freedom indices provided by two additional reports (from two other think tanks) produced similar results with respect to the least-free districts being significantly larger than the most-free districts.

If there were no relationship between the states’ district population sizes and their freedom indices, then we would expect this analysis to produce fairly random results among the three groups (i.e., low freedom, medium, and high freedom). Clearly this is not a random relationship: 15 different freedom indices (from three different reports) were evaluated and, in every case, the average district size of the least-free group of states was significantly larger than that of the most-free group.

This analysis establishes that there is a significant correlative relationship between smaller district sizes and increased freedom. Moreover, Thirty-Thousand.org contends that this is a causal relationship; that is, as the legislative districts become larger, the government becomes increasingly oligarchic and statist.


Notes:
[1] The complete TTO report is available at:
http://www.thirty-thousand.org/documents/Freedom_Index.pdf
[2] The Mercatus “Freedom in the 50 States” report can be downloaded from this page:
http://www.mercatus.org/PublicationDetails.aspx?id=26154


If you have any questions or wish to comment on this post, please visit Thirty-Thousand.org's forum. Also, many commonly asked questions are answered in the Question & Answer section of TTO’s home page.
Posted by J. E. Quidam at 6:56 AM